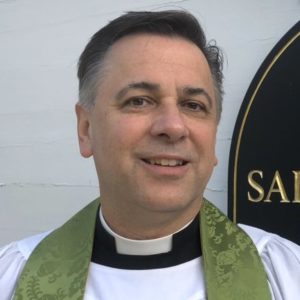 The Rev. Dr. Paul Kolbet was ordained to the priesthood in 1996 and has since served several congregations in the Dioceses of Northern Indiana and Massachusetts. Prior to coming to All Saints, he was interim rector of St. Mary’s Episcopal Church in Newton Lower Falls. He studied for the priesthood at Yale Divinity School and then went on to earn a Ph.D. in theology at the University of Notre Dame. He has taught at the University of Notre Dame, Boston College, and Yale Divinity School. He is a frequent conference speaker, the author of Augustine and the Cure of Souls: Revising a Classical Ideal and co-editor of the Harp of Prophecy: Early Christian Interpretation of the Psalms. He has also published articles on such topics early Christian spiritual practices, psychology, and pastoral strategies. He and his wife, Amy, live in Wellesley. They have one adult daughter, Chloe.

Choirmaster and Organist: Dr. Carl D. Nelson Klein
Dr. Carl Klein has been a Choirmaster and Organist in the Episcopal Church for over 35 years. He began at All Saints’ in the Summer of 2020. He conducts the Adult Choir, the two Children’s Choirs, assists in planning worship, and, of course, plays the organ. His music education was at Mansfield University of Pennsylvania (B.M. & K-12 Teaching Certification) and at the Eastman School of Music of the University of Rochester (M.M. 1988; D.M.A. 1991). He has been involved with the Association of Anglican Musicians and the American Guild of Organists for many years. He also works as an Organbuilder at C. B. Fisk, Inc. in Gloucester, MA and has published two collections of hymn-based music. A native of rural Pennsylvania, he enjoys the countryside, hills, rocks, and forests. He has two children, Everett and Christopher, who are both in college.

Margie Dissinger moved to Massachusetts in 2007 from Texas. Originally from Pennsylvania, she and her husband, Glenn, have lived in Louisiana, Texas and Minnesota before moving to Chelmsford. She has worked as a lab technician, and then worked for several churches before becoming a bookkeeper for Concord Country Club upon moving to Chelmsford. In May 2018 Margie became the Parish Administrator and bookkeeper for All Saints’ Church.

Laura Marshall is both a parishioner and staff member at All Saints. As a parishioner, she has been here since 1999 and has volunteered in many roles, in particular as a Church School leader for over a decade. In the fall of 2017 she was hired as the Director of Religious Education, responsible for the programming for children and youth from pre-k to high school. She graduated from Wesleyan University with degrees in Philosophy and English, and George Mason University with a Masters in Conflict Analysis and Resolution. She and her husband, Steve, live in Chelmsford.

Officers and the Vestry

Moved to the Vestry page

All Saints’ Episcopal Church welcomes all people who seek the love of God without regard to ability, age, color, economic circumstance, ethnic background, family configuration, gender, nationality, or sexual orientation. We promise to “seek to serve Christ in all persons, …strive for justice and peace among all people, and respect the dignity of every human being.”